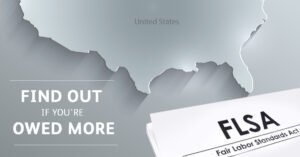 The Fair Labor Standards Act is the federal law that requires employers to pay workers the federal minimum wage and requires that employers pay workers 1.5 times their hourly wage for overtime hours worked over 40 hours per week.  However, several states have their own laws that protect workers’ wages and, in many cases, offer protection beyond what the Fair Labor Standards Act provides.  Over the past year, several states have expanded their overtime laws to extend those protections even further.

There are several categories of employees who are “exempt” from the federal overtime rule because they satisfy several requirements related to the type of work they perform and the amount of their pay.  Under federal law, the wage requirement for those exemptions was recently raised to $35,568 per year, meaning that employees making less than that amount qualify for overtime regardless of the type of work they perform.  In Pennsylvania, that requirement is about to increase to $45,500 per year – significantly higher than the federal law, making thousands of workers in that state entitled to overtime who are not entitled to overtime under the Federal law based solely on the amount they make per year.

Other states such as Colorado, Michigan, and California have either passed legislation expanding their overtime laws or have legislation pending or contemplated that will offer expansion similar to what other states have done.  It is important to be aware of increased protections in your state which could affect your entitlement to recover unpaid overtime.

If you have any questions about your entitlement to recover unpaid overtime, please call us. The law requires employers who violate federal wage law to pay the employees’ attorneys’ fees and costs, so we can represent you without any costs or fees paid by you. Call us today at (800) 616-4000 for a free consultation.

Gregg Shavitz, Shavitz Law Group, 951 Yamato Rd Ste 285, Boca Raton, FL and 830 3rd Ave, Floor 5, New York, NY.  Lawyers licensed in states including FL, NY, NJ, and TX.  The choice of a lawyer is an important decision and should not be based on advertisements alone.