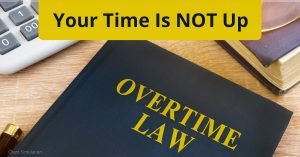 Almost every legal claim has to be asserted within a statute of limitations.  Statutes of limitations are established by state and federal legislatures and set the deadlines for filing lawsuits.  Claims for unpaid wages under the Fair Labor Standards Act, 29 USC § 201, et. seq. (FLSA) must be asserted within two years of the pay period in which the claim occurred, 29 USC § 255(a).  In a case in which an employee can show that the employer’s failure to pay overtime was “willful” — meaning that the employer either knew or showed reckless disregard as to whether his or her conduct violated the FLSA —  the statute of limitations can be extended to three years. For employees who worked in California, New Jersey or New York, the applicable state laws provide for longer statutes of limitations, allowing aggrieved workers even more time to assert their claims and potentially more damages.

In California, Labor Code Section 226 governs wage claims. This regulation allows employees to recover damages from employers who do not comply with the state’s wage payment laws.  Claims for unpaid overtime are subject to a three-year statute of limitations. However, this three-year period can be extended to four years if the employee asserts a claim for unfair business practices under California’s Unfair Competition Law, Cal. Bus. & Prof. Code §§ 17200 et seq.

For individuals employed in New York, Labor Law § 663(e) provides that claims for unpaid wages may be brought within six years of the claim accruing.  This offers all workers additional time to assert their claim and allows long term employees to recover more damages beyond the three years allocated under the FLSA.

Similarly, New Jersey extended the statute of limitations for unpaid overtime and minimum wage claims from two years to six years in August of 2018.  This change in state law means that aggrieved employees have more time to assert their claims and recover more damages beyond the FLSA’s statute of limitations.

If you feel you may have a claim for unpaid wages but are concerned the claim may be barred by the statute of limitations, please contact Shavitz Law Group today at (800) 616-4000 or visit us at www.shavitzlaw.com for a free, no obligation evaluation of your circumstances and consultation regarding your rights.