In a landmark decision, the United States Supreme Court ruled on Monday, June 15, 2020 that the protections of Title VII of the Civil Rights Act of 1964 (“Title VII”) protects gay and transgender workers from workplace discrimination.  Title VII forbids employers from discriminating against employees on the basis of sex aswell as gender, race, color, national origin and religion.

Until this decision, it was legal in over 25 states to terminate employees for being gay, bisexual or transgender.  Now, members of the LGBT community will benefit from the same protections as all other employees in the workplace.

The case is Bostoc v. Clayton County, Georgia. The complete opinion can be found at the following link: https://www.supremecourt.gov/opinions/19pdf/17-1618_hfci.pdf .

If you want to learn about your rights, please contact The Shavitz Law Group at slg@shavitzlaw.com or at 800-616-4000 for a free consultation. We would be happy to assist you in a free consultation to discuss your employment concerns. 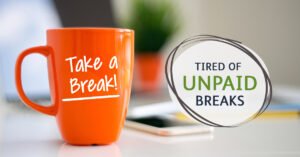 The Fair Labor Standards Act (“FLSA”), and many state wage laws, require employers to provide non-exempt employees with a meal break. A bona fide meal break under the FLSA must be for a period of more than 20 minutes, and the employee must be “completely relieved of duty” during the break for the employer to not have to pay the employee for that time.

Many employees are not completely relieved of their duties while on break, because they are required to take their lunch breaks at their work stations.  For example, a receptionist required to eat at their workstation to answer the phone in case it rings, or a security guard who stays at their post keeping watch, but taking a few minutes to eat while keeping watch, would not be “completely relieved of duty” and should be compensated for having to be available for work during their meal breaks.

A meal break is different from a rest break, which is less than 20 minutes in duration and is compensable. An employer cannot provide an employee with two separate 15-minute rest breaks but then combine the two breaks and contend the employee took a 30-minute meal break, and therefore should not be compensated. If the employee takes a break of twenty minutes or less, the time remains compensable.   In essence, smoking breaks (i.e. short duration breaks of less than 20 minutes) as they are termed are not deductible but are just part of the normal workday and that time has to be paid time.

If you are one of the many employees who have lost wages due to unpaid and untaken breaks, we can help. The law requires employers who violate federal wage law to pay the employees’ attorneys’ fees and costs, so we can represent you without any costs or fees paid by you. Call us today at (800) 616-4000 for a free consultation.

Gregg Shavitz, Shavitz Law Group, 951 Yamato Rd Ste 285, Boca Raton, FL and 830 3rd Ave, Floor 5, New York, NY.  Lawyers licensed in states including FL, NY, NJ, and TX.  The choice of a lawyer is an important decision and should not be based on advertisements alone.